When Brandon launched Reparadise, as expected for any start up, there were many holes in the tool department. One gaping void was the lack of a creeper — an essential to any service shop that can be found for 25-ish dollars at Hazard Fraught.

But, this is Camper Reparadise, where vintage reigns, and boring/mundane/mass-produced products give us the heebie-jeebies.

We needed a creeper that merits time under vintage Airstreams and Canned Hams. When this time and back saver popped up for as much as a China-made unit on a random classified tool search, I immediately knew it belonged in our camper restoration shop.

The previous owner dated it to the forties; however, there are no branding or identifying markings, so your guess is as good as ours. What we do know, on the other hand, is early creepers — like the campers of the forties and fifties — were crafted with value first. The opposite of the flat, plywood creepers pumped out of auto part stores since the seventies; antique creepers were made from hardwood and iron, with thoughtful conveniences like a tool tray and adjustable head rest.

Treating Reparadise’s team to a curved back, convenient side trays, softly worn edges, and a veneer that only comes from decades of oil-soaked hands — this creeper became an instant shop favorite. That was, until a fateful night I’d wrapped up a last minute fix underneath my truck prepping it for a two-oil-change road trip. After cleaning tools and shutting down shop in the wee hours, I headed home… but, before moving half-a-foot, the crunching sound that drops a heart to the guts reminded me I’d forgotten something.

I jumped out of the truck to inspect for damage — and found the cherished creeper underneath a tire supporting nearly two tons. Son of a bitch. This creeper’s been around doing un-thankful duty for decades, and all it took was one exhaustion-fueled slip to render an awesome piece useless. Here’s one just like it… for $175. Double S.O.B!

It’s a sad story. But — to put a positive spin on it — a $12 creeper found its way to Reparadise via the power of internet classifieds, and now there’s a worthy restoration project for the new guy. 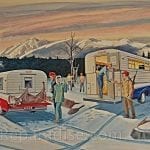 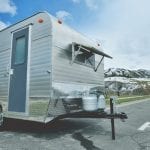